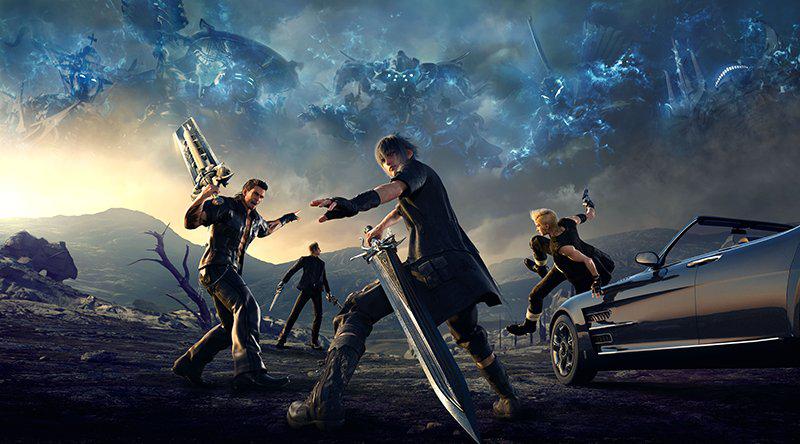 Final Fantasy XV is an action / RPG computer video game. The famous Japanese studio Square Enix worked on the development of the game, and many other games from the same series have been developed.

This project has gone through a long stage of development – the so-called production hell, which means a very long development, accompanied by frequent transfers and development difficulties. The announcement of the game took place back in 2006, and Final Fantasy XV will not be released until September 30, 2016 – ten years later.

The game will be able to play only the owners of the new generation consoles: Xbox One and PS4. When development on the game had just begun, it was planned to release the now outdated PS3 console.

It's safe to say that this is Square Enix's longest-running game.

At first, the game was planned to be called Final Fantasy XIII, but the studio was forced to abandon this name, as a result of which, in 2013, the name changed to Final Fantasy XV.

The new game from Square Enix will not relate to the plot of the previous games in the series. The main character will be a young guy – Noctis, who is also the future heir to the great kingdom called Lucis. In this kingdom, a powerful magical artifact has been preserved – a certain crystal. It is because of him that the invasion of Noctis begins, followed by the theft of the crystal and a war broke out between many states wanting to get it for themselves.

The main character – Noctis, as well as his loyal friends, decide to go in search of the artifact in order to end the war and return the lost relic of great power.

The action will unfold in a fantastic setting, dominated by the above-named kingdom of Lucis. It is very developed both in the technological and social sphere, while the surrounding states are at the level of development of the classical medieval states.

Final Fantasy XV is the first action-adventure game in the Final Fantasy video game series. The combat system in the new game is at a very high level, it combines many techniques and combo attacks. The player will be able to fight only for the main character – the rest of the satellites will be controlled by the computer. In battle, you can interact with other persons, making complex combat combinations.

The game also has the ability to use various military equipment: robots, tanks, and the like. In addition, creatures that can be summoned without problems will help in battle.

In addition to the usual battles in large areas, the player will have access to the so-called "vertical battles", the peculiarity of which is to climb your hero onto a huge monster, where you can hit him with powerful critical hits and, in the end, kill.

You can use several types of different edged weapons in battle: from swords to mines. Between them, of course, you can switch directly in a combat situation. In total, players will be able to carry five different types of weapons at the same time. In addition to the "standard" weapons, the main character will be able to use magic, which he can share with his companions.

As for the game world, it is simply huge and you can explore it completely freely, the game does not depend on the plot and welcomes free play. In this world, there is a system for changing the weather and time of day. Interestingly, time will affect your abilities and monsters. For example, especially dangerous creatures will appear at night.

For gamers who love taking photos, a smartphone has been added to Final Fantasy XV to take hundreds of photos with your protagonist.